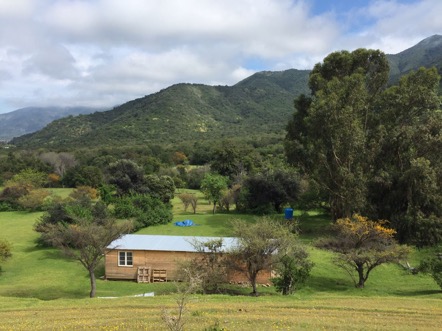 Vipassana Chile has imparted meditation courses in the country since 1995. The first course was organized by a Chilean meditator who learned about the technique in France and organized the first course in Chile bringing a teacher from abroad.
Since then, more than 100 courses have taken place on a regular basis, welcoming 3,000 meditators who have learned the technique. Courses have been conducted in locations such as Puangue, Pisco Elqui, Salamanca, Valdivia, Temuco, Chonchi, as well as Putaendo, not far from Santiago.

At the beginning there were one or two 10-day courses per year, but now there are between 6 and 8, annually.  Additionally, 3-day courses,  1-day courses, group meditations, and online meditations are also organized so that old students may keep up their practice. The teaching of anapana to children and adults technique is also available.

At a later stage, the Vipassana Chile Corporation was created, a non-profit entity that channels its activities with a common objective: that Vipassana reaches as many people as possible through the organization of meditation retreats. The purpose is to inspire and support those students who want to strengthen their Sila (moral fortitude), and who selflessly offer their service so that the Dhamma may reach everybody.

Vipassana Chile is a volunteer organization, which carries out its activities thanks to the altruistic service and donations from meditators who feel grateful for the daily benefits afforded by this technique - in such a way that others also may benefit, just as they did.

Courses and activities are taught and carried out free of charge by old student meditators. They perform different tasks such as kitchen duties, cleaning, etc, during courses. Then, of course, there are the teachers and those who carry out permanent support activities within the organization.

Students may only make donations after having completed a 10-day course. In this way, purity of purpose is preserved among those who contribute with their service and donations ensuring future courses may continue to be held.

In 2008 a plot of land was acquired in Tantehue, near Melipilla, around 2 hour drive from Santiago, where a meditation center will eventually be built. Steps in its development have already been taken to move things forward.  The center already has a name given in Pali by S.N. Goenka:  Dhamma Pasanna, which means "Clarity and brilliance of the Dhamma."

We hope that Dhamma Pasanna will be a meeting point for the development of meditation and service, and that as a center it will allow more and more people, from Chile and around the world, to get to know this valuable technique; and also that students and servers may continue growing in this path of purification and liberation.

May all beings be happy!